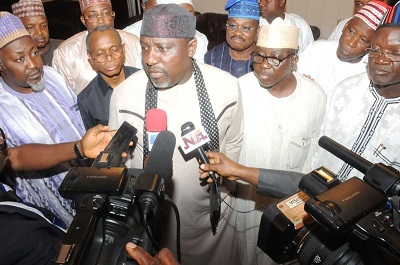 Strong indications emerged on Saturday that governors of the All Progressives Congress, under the aegis of the Progressive Governors’ Forum, will seek for the withdrawal of ongoing court cases instituted by the Senate Unity Forum against the Dr. Bukola Saraki-led Senate leadership.

It was learnt in Abuja on Saturday that the Governor Adams Oshiomhole-led committee set up by the PGF to mediate in the senate crisis is likely to push for an out-of-court settlement.

The Unity Forum, which is made up of Senators opposed to the process leading to the election of Saraki as President of the Senate, had on July 27 filed a suit at the Federal High Court in Abuja, asking the court to nullify the inauguration of the 8th Senate carried out by the management of the National Assembly, on June 9.

They alleged that the Senate Standing Order used for the conduct of the election which brought in the current leadership of the National Assembly was forged.

But a source in the PGF, who spoke on condition of anonymity because he was not authorized to speak to the media, explained that no option was “off the table” in finding a win-win situation to the current impasse in the Senate.

He said, “The governors as well as the party are favourably disposed to putting this ugly situation behind them.

“There is a very high probability that the (Oshiomhole-led) committee will seek the discontinuance of court cases relating to the events of June 9 in order to get the two sides to sit on a round table.

“Besides, the party’s constitution, specifically Article 21 (x) encourages party members to exhaust all avenues for redress provided for by the party before going to court”.