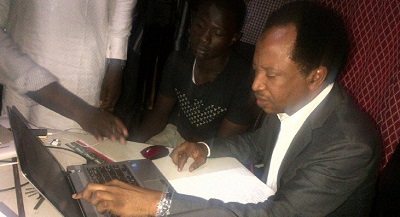 While handing over the forms and personally filling out the PIN Codes from a computer to beneficiaries at the Conference Centre of the National Teachers Institute, NTI, in Kaduna, the senator said the exercise is a gesture to help unemployed youths from poor families with the forms PIN Code in order to become useful to the society and to directly contribute in bringing lasting peace and security in the country.

The senator expressed concern that in the past, youths especially from his zone, could not make any meaningful contribution to the fight against security challenges in the country because they have missed recruitment opportunities in Nigerian Custom Service, Police, Nigerian Army, Immigration, NSCDC, Nigerian Prisons Service.

“I have made it a priority that young men and women from my zone will never miss any opportunity of recruitment into any institution and organizations anymore.

“So long as I am on this seat, no insect or idol can prevent you from achieving your goals of becoming useful to the society.

“As a senator, I am in Abuja for you, I will always do whatever I can for you to have a future that Nigeria will be proud of. This is not a political gathering, but I have also provided transport and feeding for the candidates”, he told beneficiaries.

Sen. Sani advised politicians especially in the north, to emulate their counterparts in the south by assisting youths instead of giving them handouts.

One of the beneficiaries, Sani Shehu, from Birnin Gwari LGA, who spoke on behalf of other beneficiaries, thanked the Senator for the good gesture and promised to be useful to the society.