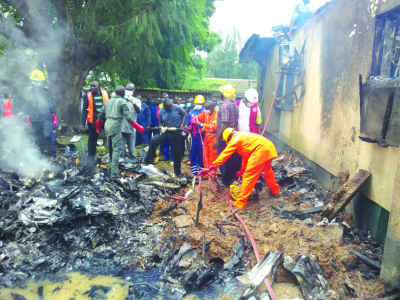 Identities of the victims of the Nigerian Air Force plane, which crashed around 6:45am on Saturday into residential quarters at the Ribadu Cantonment in Kaduna State, has emerged.

Squadron Leader Suara was the Pilot of the ill-fated crash. He is survived by a young wife.

The identities of the victims came to the fore as the Permanent Secretary, Ministry of Defence, Alhaji Isma’ila in company of the Chief of Defence Staff, Air Officer Commanding (AOC) Training Command, General Officer Commanding (GOC) 1 Division, Commandants of Air force Institute of Technology (AFIT) and Nigerian Defence Academy and other top military officers, paid families of the deceased condolence visit at the NAF base, Kaduna yesterday.

As at the time of Isma’ila’s visit, condolence registers have been opened in the victims’ houses, while some family members were still in a state of shock.

Wife of the pilot, a young woman, who lost a husband she had only been married to for over a year, thanked the Permanent Secretary and his entourage for the visit.

Speaking with reporters after inspecting the scene of the crash, the Permanent Secretary noted that their visit was to commensurate with the families who lost their loved ones and their property in the unfortunate crash that occurred on Saturday.

“It is a very sad even not only to the Nigerian Air Force, but to all Nigerians we have lost very able officers and their families and we want to on behalf of the Federal Government extend our condolences to all of them and pray for the repose of their souls.

“On efforts the FG is making to foster the reoccurrence of such crash, he said “with the passion and zeal the president came in with, you will appreciate that he is doing everything possible to address some of these challenges of security in the country. The Nigerian Army, Airforce and Navy are all one and he is doing all his best to reposition them to meet global standards”, he said.