Home Metro News MUST READ!!! What Ooni Told Me About The Yoruba Race Before He...
Facebook
Twitter
WhatsApp 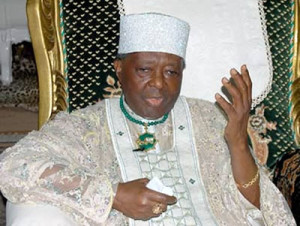 Former President Olusegun Obasanjo has appealed to the kingmakers of Ile-Ife to follow strictly, the laid down rules and procedures for the appointment and selection of the new Ooni following the demise of Oba Okunade Sijuwade.

Chief Obasanjo made the appeal when he visited the kingmakers at the Ooni’s palace on Friday, to commiserate with the chiefs and the people of Ife over the death of their king.

“I was here in this palace ten days before the demise of kabiyesi and he told me how the Yoruba race is margnalised in the scheme of things. He also told me to ensure that the Yoruba race got its own share of things in the country,” he said. He, therefore asked the kingmakers to be careful about the choice of the person that would occupy the stool saying that late Sijuwade while occupying the stool has taken the seat of Ooni beyond Africa.

The Obalufe of Ife, Gabriel Omisakin who received Obasanjo on behalf of other chiefs assured the former president the choice of the new Ooni would not lead to any crises.

He promised that the kingmakers would ensure that diligent, due process for the selection of new Ooni would be carried out to ensure that whoever emerge is the choice of the people.