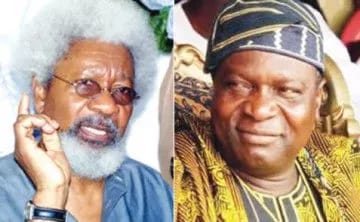 A former Governor of Osun State, Prince Olagunsoye Oyinlola has said that the recent tongue lash he received from Professor Wole Soyinka, over the chairmanship of the Board of Trustees of the Centre for Black Culture and International Understanding, Osogbo, might not be unconnected with an alleged friction between the Nobel Laureate and former President Olusegun Obasanjo.

Soyinka and Oyinlola have in the news of late over their claims to the chairmanship of separate boards for the UNESCO-approved centre.

While documents of the agreement that established the centre make Oyinlola the permanent chairman of the board, the Rauf Aregbesola administration had established another board and appointed Soyinka its chairman, upon succeeding Oyinlola.

Aside the fact that the matter has been a subject of litigation, Soyinka, last week, accused Oyinlola of illegally carrying on as the board chairman and soliciting for funds in the name of the centre.

Clearing the air on the matter at a press conference held in his Okuku home town, the former governor said, “Why all these attacks on my person? I have asked myself repeatedly. Could it be a case of transferred aggression? If he has any problem with his brother, elder statesman, Gen. Olusegun Obasanjo, why transferring the aggression to me? I have never done anything in the past to warrant what I have been getting from Soyinka.

“Does Soyinka know that an elder in Yorubaland operates within certain ethical boundaries? Does he know that elders must never be seen playing the hen otherwise foul smell will be their companion?”
Oyinlola, who is one of the political associates of the former President, said the CBCIU was a joint property of the UNESCO, the Federal Government, Osun State and the late Prof. Ullie Beier, whose works form the bulk of the items kept at the centre.

The former governor presented the documents and said they were available for Prof. Soyinka to view.
Oyinlola noted that Aregbesola, who appointed Soyinka as the board chairman, had eventually discovered the true status of the centre, and had even initiated a process to reconcile him and Soyinka but the Nobel laureate had rebuffed all efforts he made to have a sit down with him.

He said, “Because I believe, to the best of my knowledge, that there is no personal animosity between me and Professor Soyinka, I have, in consultation with my governor, Ogbeni Rauf Aregbesola, made some moves to meet the professor to give him the correct information on the centre for him to be properly guided. All the moves have, sadly, been rebuffed.

“I paid a visit to his house in Lagos on the advice of the governor. He was not at home and never acknowledged the visit. I made several phone calls to him which were never answered. I tried reaching him unsuccessfully through his daughter, Mrs. Moremi Onijala. The last was an intervention organised between us by Aregbesola for Senator Sola Adeyeye to broker peace.

“The senator met with me and promised to meet Soyinka and get back to me. I was waiting for the feedback when I read Soyinka, an elder statesman and a supposed culture icon attacking me once again”.