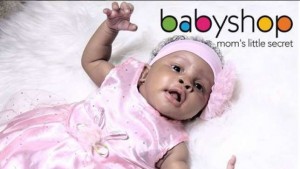 As I reported earlier, Tanzanian singer Diamond Platnumz has followed through on his announcement for brands to sponsor the public unveiling of his newborn daughter Tiffah

Tiffah’s face was publicly unveiled yesterday (September 21) and it came with the logo of a Tanzanian bank.

Diamond Platnumz shared another picture of his daughter today (September 20) which featured the logo of a mall in Tanzania.

The singer must have raked him a good amount of money for the unveiling of his daughter’s face sponsored by these brands.

Last month the music star was in Nigeria where he spoke about claims that his daughter wasn’t his.