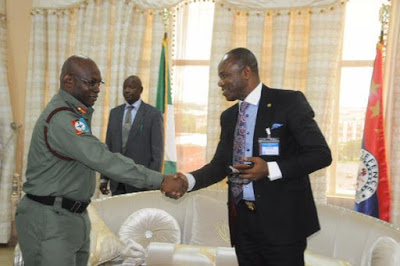 The security of the nation’s oil pipelines is now to be overseen by men of the Nigerian military, the Defence Headquarters said on Tuesday.

The Acting Director, Defence Information, Col. Rabe Abubakar, who made this disclosure in a statement issued in Abuja, said this followed a meeting between the Group Managing Director of the Nigerian National Petroleum Corporation, Dr. Emmanuel Kachikwu and the Chief of Defence Staff, Gen. Gabriel Olonisakin, where modalities to get the military to protect the strategic national assets, were discussed.

The statement quoted the NNPC’s GMD as having said that he visited the CDS as a follow up to a proposal the corporation presented to President Muhammadu Buhari to have the Army Corps of Engineers to maintain and secure the nation’s pipelines.

It further quoted the NNPC’s GMD as having said that the corporation was taking a holistic step to ensure that the best hands were used to protect the pipelines.

According to the DDI, Mr. Kachikwu said that the NNPC was also engaging the services of the Navy and the Air Force in collaborative efforts to secure the nation’s pipelines and to prevent the theft of the country’s oil.

He added that the NNPC boss solicited for the support of the CDS in the fight against crude oil theft, pipeline vandalism and other maritime crime.

Towards this end, Kachikwu told Gen. Olonisakin that the NNPC was making moves to procure more boats for the Navy for patrol operations and trackers for the monitoring of vessels coming into the country.

The statement also quoted the GMD as saying that the NNPC had also reached out to the Chief of Air Staff, Air Marshal Sadiq Abubakar, on the issue.

“We are trying to equip the Navy a lot more with boats for patrols; we are trying to get trackers and central system to be able to monitor every vessel that comes in and out of the country.

“We have equally spoken with the Chief of Air Staff on other effective ways of collaboration”, he was quoted as having said.

The NNPC’s GMD was said to have told the Defence chief that the country was losing 250,000 barrels of crude oil per day, which was one-fifth of the total production in the country.

Kachikwu, who called for more efforts to address the incident of crude of theft, said that the ugly trend had however, reduced since he became the GMD of the NNPC.