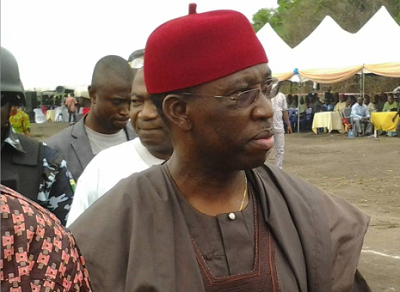 Governor Ifeanyi Okowa of Delta State on Sunday advised Nigerians to be concerned with the change process rather than President Muhammadu Buhari’s wealth.

Okowa decried various statements from some Nigerians over Buhari’s declaration of assets.

“What the President has today in terms of his personal wealth ought not to be the business of Nigerians”, the governor added.

He spoke in Benin at the 13 years anniversary celebration of Rock of Ages Christian Assembly International Incorporation.

Okowa, however, noted that Buhari’s declaration of assets was a welcome development.

Responding to questions from newsmen after the service on PMB’s asset declaration, he said, “I don’t comment about asset declaration; assets declaration is personal, the man has declared his asset which is a welcome idea. But his personal wealth and all he has at the moment is not supposed to be the business of Nigerians.

“The only thing that we should be concerned about is what is going to be his performance in government; that is where we should concentrate on”.

Okowa explained that his government had put in place measures to bring respite to the people by restructuring its expenditure to cut cost, in spite of the huge debts it inherited from the immediate past administration in the state.

He urged the congregation to pray fervently for the country for God to heal the land of all the challenges bedevilling it, calling on Nigerians to desist from raining abuses on their leaders.

The governor, whose election is being challenged at the Governorship Election Petitions Tribunal by the All progressives Congress, believed that God had been merciful to Nigeria.

He said, “When I listen to our father, Pastor Omobude, there is still a lot of Jordan to cross; there is still a lot land to be conquered. Please take note of that so that you will not relax that we have arrived. It is time to pray more, not only for the church but for Nigeria and all the states in this country”.