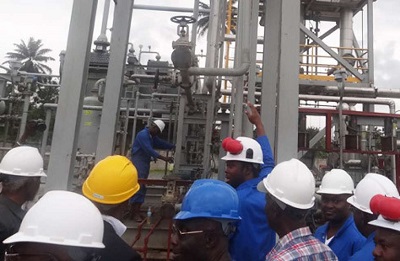 The refineries are in Port-Harcourt (two), the Warri Refinery and Kaduna Refinery and Petrochemical Company, KRPC.

The NNPC boss spoke after touring the various units of the Kaduna refinery where he lamented that with what he has seen, the four refineries cannot take Nigeria anywhere.

According to Kachikwu, given the fact that the refineries were built around 30 to 40 years ago, there is the urgent need to support them with new modules and structures that are in line with global best practices in terms of new business module, new commercial module and technological approach.

“In term of how to get the refinery to function, like I said, new business module, new commercial module, new approach to how we have to get to where we should be, but what is obtainable is that most of our refineries are close to 30-40 years old.

“We need to begin to look at building new refineries in the same land space where they can share facilities, so that you will have something to lean on when these old ones are beginning to kick out”, he said.

Reacting to calls by some Nigerians especially Governor Nasir El-Rufai of Kaduna State to “kill” the state-owned oil firm before it kills Nigeria as a result of the high level of alleged corruption there, Dr. Kachikwu pleaded to be given the benefit of the doubt to turn things around at the NNPC.

“That stuff of killing NNPC was historical before I came in, but we are working hard to justify why it shouldn’t be killed, but I am a business man, if we get to a point where we are not doing well enough, and it needs to be killed, we look at what alternatives are.

“Today, whether we like it or not, lets be realistic here, irrespective of the fact that negative gets a lot of more publicity than the positives, this organisation has kept this country going for the last 30-40 years, it has built and sustained the refineries, it has delivered fuel the moment our refineries don’t work, it has delivered retails in a very difficult terrain.

“So what I am trying to say is that you don’t throw away the baby with the bath water, there is bath water that need to be thrown away, and we are doing that, but there is a healthy baby sitting there that we are going to nurture it”, he explained.

The NNPC boss also said over US$200 million was being saved the nation from the cancellation of the oil swap deal.

“The essence of crude swap cancellation is that straight away you are saving over 200 million plus dollars by virtue of doing that. You have transparency in the deal per month and you have transparency that are embedded in those processes, the new processes”, he added.

Kachukwu, who commended the resilience and determination of the engineers of the four refineries, assured that the NNPC is committed to making a difference within the 90 days’ time frame he gave when he assumed the leadership of the corporation.

Speaking further on the status of the KRPC he said: “Obviously, we need new modules because with this modules it won’t get us to where we need to be very rapidly. Three out of the six units of the plants were down, some of them for a very long gestation periods, we need to sit down and see what modules, how do you turn around the new refinery. How do you work on emergency basis components of the ones that are there?

“Without them we are not going to get out of problems of fuel supply, power supply and all that. So we are going to have a gone whole commercial structure, gone whole engineering structure a lot needs to be done different from models we are pursuing right now. For me, it is truth time”.

On security of the nation’s pipelines he said: “we are doing quite a lot on security as you are aware the working with the security forces to enhance the Warri to Kaduna point has been tested now for integrity and I think by my understanding for the last testing is that is fairly ok now to take control if the FCC units are working.

“So on a short term basis, we have been able to deal with that. Medium term basis we are going to work with the security agencies to ensure that the sort of destruction you find on pipelines not just from Warri to Kaduna but the whole country become a thing of the past.

“We working on a very enhanced, very robust, very accelerated program to deal with that working with the security forces. We are trying everything that we can and we are sending a body language that the business of messing around with the pipelines is over and I think the message is going round as loud as ever”.