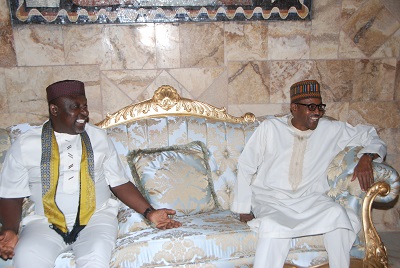 The South East Zonal Chapter of All Progressives Congress, APC, on Sunday said Governor Rochas Okorocha of Imo State did not “truly” campaign for the party and President Muhammadu Buhari in the 2015 general elections.
The spokesman for the APC in the South East, Mr. Osita Okechukwu, said this in a statement made available to journalists in Enugu.
The party was reacting to a recent interview granted by Okorocha in which he blamed Igbos for their exclusion in recent appointments made by Buhari.
In the interview, Okorocha reportedly said, “Some of the appointments we lost were caused by our people”.
Okorocha, also in the interview, claimed that Igbo leaders refused to listen to him when he cried like “a lonely voice in the wilderness” while urging the Igbos to embrace Buhari and the APC.
Furthermore, he accused Igbos of putting their eggs in one basket despite his admonitions that such a decision was unwise.
Faulting his submissions, Okechukwu insisted that “Okorocha should take responsibility for Igbo exclusion in the appointments, rather than passing the buck to Ndigbo”.
In the statement titled ‘Governor Rochas Okorocha neither truly campaigned for President Buhari nor APC’, the South East APC spokesman said, “All one can say is that to the best of knowledge, he (Okorocha) neither truly campaigned for President Muhammadu Buhari nor the All Progressives Congress.
“I thinks that while we blame Ndigbo for putting all our eggs in one basket, we should blame our leaders who genuinely didn’t campaign for President Buhari nor APC candidates in their domain.
“I challenge Governor Okorocha to tell the world how far he assisted Senator Osita Izunaso for his bid for Orlu Senatorial District, his own constituency, and that of Honourables Uche Onyeguocha and Uwajumogu of Owerri and Okigwe districts respectively”.
Noting that a little assistance from the governor could have earned APC two senatorial seats and other legislative positions in the South East, Okechukwu made it clear that Okorocha should blame himself first before blaming Igbos.
He stressed that Okorocha undermined the APC zoning arrangement when he decided to contest the party’s presidential election primaries against Buhari.
“This is a man some of us advised not to run against the zoning convention, that it will deny Ndigbo the chance of producing either the chairman or the vice presidential slot and he refused.
“He thought we are in Nollywood”, the APC zonal spokesman said.
Okechukwu said Okorocha should henceforth “desist from the blame game and accept responsibility for the fate of Ndigbo in Buhari’s appointments”.
Continuing, he stressed that Okorocha lied when he claimed that he was crying like a lonely voice in the wilderness for Ndigbo to vote for Buhari.
According to the spokesman, if Okorocha really cried like a lonely voice in the wilderness, Buhari would have gotten at least 30 per cent of the votes cast in Imo State, and not 18 per cent.
“If Okorocha worked for APC in the South East, how come we did not even win a single senatorial seat in Imo and the entire zone?
“He should stop this blame game and accept responsibility for the fate that has befallen Ndigbo”, Okechukwu said.