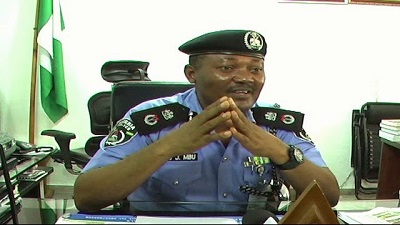 Following his unusual quietness and disappearance from public glare in recent times, many people wrongly assumed controversial Assistant Inspector-General of Police, Mr. Joseph Mbu, had been quietly dismissed but the Nigeria Police Force said on Friday that he is still in active service.

The former Rivers and FCT Commissioner of Police, who came to national consciousness following his many public battles with then Governor of Rivers State, Chibuike Rotimi Amaechi, was recently transferred to Jos, Plateau State, as Commandant, Police Staff College.

The Force Public Relations Officer, Olabisi Kolawole, was forced to react to the claim by some activists that Mbu’s quietness betrayed his controversial bearing, wondering if he was still in the Force.

In a simple text message in response to inquiries if Mr. Mbu is still in service, she said “He is still with the Force; posted to the Police Staff College, Jos, Plateau State, as Commandant”.

AIG Mbu’s many controversies include a statement he made upon being redeployed to Abuja as Commissioner of Police FCT command in 2014 that he is the lion that tamed “the leopard of Port Harcourt” in veiled reference to Amaechi.

While serving as CP in the FCT, Mbu would again make news headlines for the wrong reasons when he banned the #BringBackOurGirls group from holding street protests and when his directive was flouted ordered his men to tear-gas the group. However, the then IG, Mohammed Abubakar, overruled the directive.

Later, when he became Assistant Inspector-General of Police in charge of Zone 7 Police Command, Abuja, Mbu allegedly ordered the detention of a reporter with the Africa Independent Television, AIT, Mr. Amaechi Anekwe, for reportedly describing him as “controversial”.

In the build-up to 2015 general elections, when he was redeployed to Lagos to oversee the conduct of elections, Mr. Mbu threatened to kill 10 persons for every policeman killed in the line of duty.

Following public outrage over the statement, Mbu said he was misinterpreted, although, he admitted the ‘threat’ sent jitters down the spine of political thugs and other violent groups as no policeman under his watch throughout the duration of the polls, was attacked.