Home National News Odd News Russian Teen Get Detailed Skull Tattooed On One Side Of His Face...
Facebook
Twitter
WhatsApp 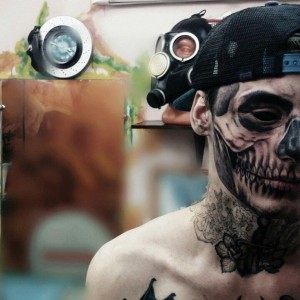 This Russian teenager is turning heads in his hometown of Krasnoyarsk for looking like a walking, talking X-Ray. The entire right side of his face is covered with a skull tattoo, complete with gaping eye sockets, blackened nose, and perfectly traced bones and teeth. He’s even colored his right eyeball black for a hollow effect! Scoop has more:

Nikita Lesnoy was fascinated by tattoos as a child, ever since he saw one made by his father. As he grew older he began to research the subject more, eventually getting his first tattoo at age 15. And now at 18 years, half of his face is inked with a skull. He works at a tattoo parlour himself, so his bizarre face hasn’t affected his career.

“Nobody worries about my look too much in my line of work, because I also have my dream job working in a tattoo studio,” he said. But he admitted that people on the streets are often shocked by his appearance. Nearly everyone gapes at him, some in admiration, others in disgust. His own mother was horrified at first, when she saw that his face was permanently imprinted with a skull. But she got used to it eventually. “It did not affect our relationship,” he said. “I am still her son just as I was before. She understands that each person has hobbies, and an image – this is my passion.”

Lesnoy said that of all the tattoos he’s gotten so far, the skull is the most complicated. In fact, he searched for a competent tattoo artist for two years before he found someone who could reproduce an anatomically accurate skull on his face. Getting inked on the face is undoubtedly painful, but Lesnoy preferred not to take any anesthesia during the process. “I will remember the pain for the rest of my life , but it was worth it,” he said.