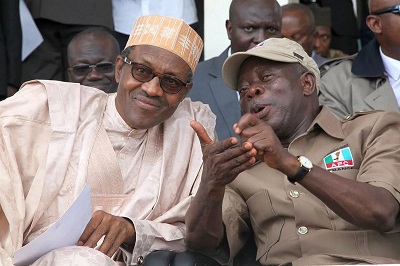 In a statement issued on Monday by his Special Assistant on Public Communications and New Media, Lere Olayinka, Fayose accused Buhari’s style of governance since his emergence on May 29, 2015, as one that portrays him as a president of Northern Nigeria only. He stated that it was wrong for President Buhari to have made 31 major appointments and picked only seven from the South while 24 were from the North.

However, responding to Fayose’s outburst, Sani said in a statement on Tuesday that although everyone has a right to freedom of expression, Fayose’s recent utterances are nothing but “divisive, inciting, provocative, and mischievous tantrums against President Muhammadu Buhari.”

I recognize the fundamental rights of Ekiti State Governor to freedom of expression.

I unreservedly condemn his divisive, inciting, provocative and mischievous tantrums and invectives against President Muhammadu Buhari.

Ekiti Governor is a relic of the old order, he represents the old Nigeria of waste, of hollow ritual of noise and nuisance.

Fayose is a man suffering from political depression in the aftermath of the defeat of his patriarch Goodluck Jonathan. He is a hallucinating Man of the ancient, yet to come to terms with the realities of a new dawn and new Nigeria.

The Ekiti governor is a man on the loose ready to use stones, sticks and any object to inflict harm and to be noticed.

Fayose failed to stop the election of President Muhammadu Buhari by the use of false, misleading and subversive propaganda laced with lies and deceit and now resort to firing arrows of hate, smear and distortions.

Fayose is a glorified tout, deficient in morals, character and courteousness.

Fayose’s imprudent utterances are nothing but an attempt to incite Nigerians from the South against those from the North.

Ekiti Governor’s utterances are unbecoming of a state Governor who should symbolize, exemplify and personify national unity and peace.

Fayose’s utterances are farts from a rotten road side Beans meal.

The constitution of the Federal Republic Of Nigeria guarantees all Nigerians the right to freely express their opinion and criticize the operations of Government. The Ekiti Governor is simply on a toxic smear campaign against PMB.

President Muhammadu Buhari is not a ‘northern president’:He is a Nigerian president out to correct the wrong of the erstwhile sectional president whom the Fayoses of Nigeria supported and collaborated with.

Fayose is a weeping and whipping boy of the dead PDP.

I call on the APC Governors to appropriately respond to their peer, Fayose and return him to the cesspit pit, where he rightly belongs.