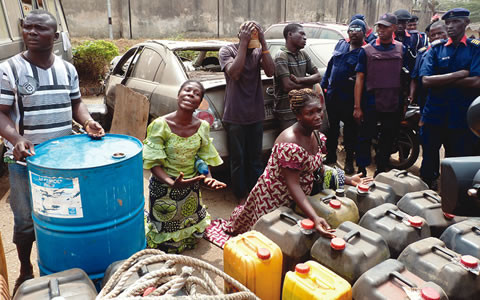 The Nigeria Security and Civil Defence Corps (NSCDC) said it destroyed 10 illegal refineries in three states and seized 42 oil tankers used in diverting petroleum products to the black market.
The Commandant General of the Corps, Abdulahi Gana, told journalists in Minna, Niger State, on Thursday that the operation was carried out between July and September.
“On Friday we destroyed three illegal refineries in Rivers state; within the week we destroyed five in Bayelsa and another two in Abia”, he said.
The commandant general expressed dismay that the Federal Government was losing much oil revenue to the operations of oil thieves than it was receiving.
He said the corps would continue to safeguard the country’s critical infrastructure and national assets to ensure that its development efforts remained on course.
He said the Corps deployed 40,000 of its personnel to strategic locations across the country to ensure a hitch-free Sallah celebration.
Gana said that ensuring the security of the country was everybody’s business and should not be left to the government alone.
He, therefore, urged Nigerians to report any suspicious persons or objects to any security agency nearest to them. (NAN)