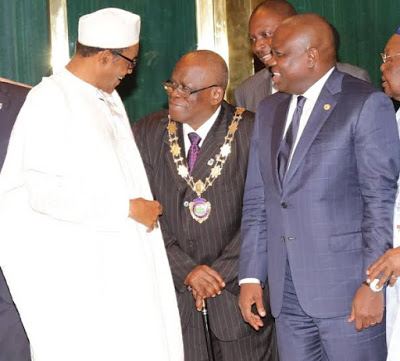 Governor Akinwunmi Ambode of Lagos State says President Muhammadu Buhari has brought credibility and integrity into public office since his assumption of office over three months ago.

The governor said within the last 100 days, the president had brought about strong leadership, which had shown direction to all Nigerians.

Ambode, who was part of the delegation of the Institute of Chartered Accountants of Nigeria (ICAN) that visited President Buhari on Tuesday at the Presidential Villa, Abuja, expressed these views in an interview with State House correspondents after the meeting.

According to the governor, within the last 100 days, President Buhari has also come up with moral leadership that is required to fight corruption in the country.

The Lagos governor noted that President Buhari’s leadership style was being witnessed in states of the federation as everyone was beginning to feel obliged to obey the rule of law.

“Nobody is judging anyone. What we have seen since May 29 is about strong leadership that has shown direction to all Nigerians. The mantra of such leadership that is being reflected by the president is what we’re seeing in other states. Everybody is beginning to feel that they must obey the rule of law. All revenue agencies are now paying to a single account and that makes everyone to be accountable”.