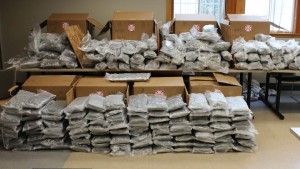 A 38 year old mother of three, Rashidat Abdulkarim, who was arrested by officials of the National Drug Law Enforcement Agency for attempting to export 2.04kg of cannabis to South Africa has accused her husband of setting her up.

According to The Nation, the dried weed found in her luggage at the cargo section of Nigerian Aviation Handling Company, tested positive for cannabis and was concealed in cartons of seasoning cubes. Rashidat, who sells female shoes and hand bags said that she is still in deep shock that cannabis was found in the parcel her husband told her to collect from a man which she was supposed to deliver to him when she gets to South Africa

“I am in shock and pained that my husband is behind my problem. My husband sent twenty-eight thousand naira to buy locally made textiles. He also told me that one man will bring food seasoning and herbal medicines to me. I bought the textiles and added it to the seasoning bought by the man. On getting to the airport, drug was found inside the carton of seasoning. I am so sad and disappointed. I struggle to fend for myself and my three children. Even before my husband traveled to South Africa, he left me with the upkeep of the family. I have suffered so much financial neglect. I have never smuggled drugs all my life. He had done the worst. My eldest child is only thirteen years”she said.