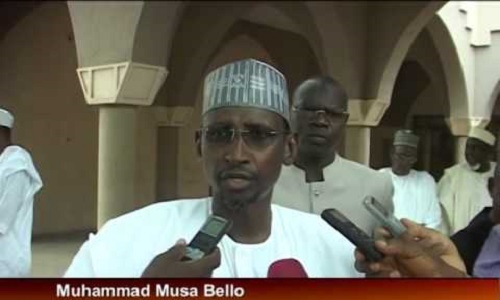 A cacophony of voices have erupted over the submission of the name of Mallam Muhammad Bello to the Senate as the ministerial nominee from Adamawa State by President Muhammadu Buhari.

Bello is among the second batch of ministerial nominees submitted to the Senate on Monday.

While describing the nomination as suicidal and a big political blunder capable of making the All Progressives Congress to lose future elections in the state, the organizing secretary of APC in Adamawa, Mallam Ahmed Lawal, said Bello is not known to the party in the state and neither was the Adamawa APC consulted before his name was forwarded.

“As a party, we don’t know the nominee because as the organizing secretary of the party who is in charge of registration of members, I doubt if Bello is even a card carrying member of the party.

“We were not consulted before his name was sent. He was never with us during campaigns that usher in APC as the ruling party and we don’t know how his name get there”, he said.

Lawal recalled that when an active member of the party in person of Babachir David Lawal, was appointed as SGF, no one raised any objection as his effort towards the victory of the party was well acknowledged but that the same cannot be said about Bello.

“If people that worked for the victory of the party are sidelined, the party will forever remain stunted”, he said.

In the same vein, former interim National Vice Chairman of APC (North East) Dr. Umar Duhu, described the nomination of Bello as the height of injustice as he worked against the party’s victory in the build up to the presidential election.

“Bello was the immediate former chairman of National Hajj Commission (NAHCON) whose support for the former ruling party was an open secret and worked against Buhari’s candidature, he alleged.

“I have to state in categorical term that the president was not fair to some of us who were in the opposition since 1999.

“I was even the one who registered former Vice President Atiku Abubakar into the party and therefore it is a great disservice for the president not to consult with any one of us in Adamawa before Bello’s name was submitted.

“I wouldn’t have complained if any of the politicians was given the appointment because he would have carried all the other politicians along knowing who among them worked for the success of the party”, Duhu lamented.