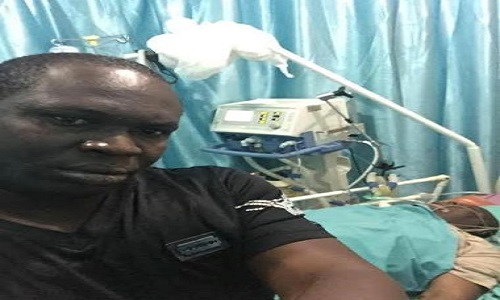 The younger brother of the first civilian Governor of Bayelsa State, Chief Diepreye Solomon Peter Alamieyeseigha, Ziworitin Alamieyeseigha, has shared a photo of the late ‘governor-general of the Ijaw nation’ while he was on life support.

Alamieyeseigha reportedly slipped into a coma at the University of Port Harcourt Teaching Hospital, Rivers State and was pronounced dead on October 10, 2015 at the age of 62.

Governor Seriake Dickson had on Tuesday revealed that the ex-governor died because he was harassed and forced to abandon his treatment abroad for kidney disease, diabetes and high blood pressure.

It was not immediately clear what Ziworitin hoped to achieve by sharing the photo of his late elder brother on life support, except perhaps that is his own way of mourning the ex-governor.