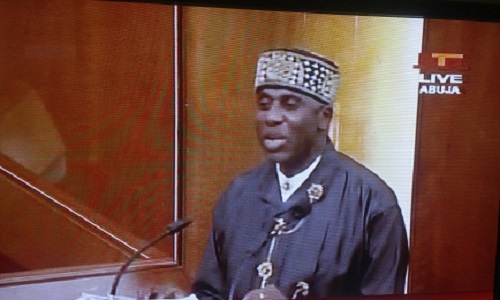 As expected, the screening of the ministerial nominee from River State and former governor Chibuike Rotimi Amaechi on Thursday, generated controversy among senators over whether he should be allowed to answer questions or not.

Amaechi was the first nominee to be invited into the Senate chamber after being denied the opportunity thrice as a result of a petition against him over alleged corruption.

The Senator Samuel Anyanwu-led Committee on Ethics, Privileges and Petitions submitted the report of the petition against Amaechi before the commencement of the ministerial screening.

In his opening remarks, Amaechi greeted the senators and gave special recognition to senators from Rivers State.

He spoke on his political antecedents as Speaker and later Governor of Rivers State for eight years each, touching on his achievements in education, health, roads and public accountability among others.

“We refined governance and repositioned leadership under my tenure as governor”, he said.

When it was time to ask questions, the Minority Leader, Senator Godswill Akpabio, raised a point of order, saying the PDP caucus in the Senate agreed not to ask Amaechi any question as a result of the petitions pending against his nomination.

This position was however, rejected by the Senate Leader, Ali Ndume, who guided the Senate as its Leader.

Ndume also asked the Senate to permit the nominee to take a bow and go as a former member of the legislature, adding that Mr. Amaechi can be screened without debating the report of the committee on ethics.

The Senate leader’s reference to the PDP caucus as “you people”, in reference to their refusal to ask the ex-Rivers governor any question, however, did not go down well and he was forced to apologize and withdraw the comment.

After responding to questions from about eight All Progressives Congress senators for about 50 minutes, the ministerial nominee was finally allowed to take his leave.

As at the time of publishing this report, the ministerial nominee from Bayelsa State, Senator Heineken Lokpobiri was being called into the Senate chambers for his screening.