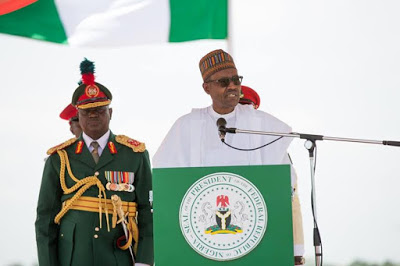 President Muhammadu Buhari Thursday morning raised the hope of Nigerians that they will soon be feeling the full effect of the changes being introduced by his government.

He gave the assurance in his broadcast to mark the country’s 55th independence anniversary.

“All the early signs are that within months, the whole country would begin to feel a change for the better”, he said.

He also harped on the need for Nigerians to change themselves and why there should not be unnecessary apprehension over delay in announcement of his ministers.

The president on Wednesday evening, submitted the ministerial list to the Senate President, Dr. Bukola Saraki, in fulfilment of a promise he made that he would appoint ministers by end of September.

According to him, it would have been tardy to name the ministers when handover notes had not been properly studied.

Buhari said: “Fellow Nigerians, there have been a lot of anxiety and impatience over the apparent delay in announcement of ministers. There is no cause to be anxious.

“Our government set out to do things methodically and properly. We received the handing over notes from the outgoing government only four days before taking over.

“Consequently, the Joda Transition Committee submitted its report on the reorganisation of Federal Government structure after studying the handover notes.

“It would have been haphazard to announce ministers when the government had not finalised the number of ministries to optimally carry the burden of governance”.

President Buhari said the first set of names have been forwarded to the Senate for confirmation, others will follow soon, he added.

There are unconfirmed reports that the ministerial list sent to the Senate contained only 21 names with the rest set to follow next Tuesday, when the red chamber resumes plenary.

“Anyway, the wait is over. The first set of names for ministerial nominees for confirmation has been sent to the senate. Subsequent lists will be forwarded in due course.

“Impatience is not a virtue. Order is more vital than speed. Careful and deliberate decisions after consultations get far better results. And better results for our country is what the APC (All Progressives Congress) government for change is all about”, he said.

On the Independence Day celebrations, President Muhammadu Buhari said October 1 is a day for joy because it marks the day, 55 years ago, that the country liberated itself from the shackles of colonialism and began its long march to nationhood and to greatness.

He also said besides being the ninth most populated country on the planet, Nigeria is blessed with arable land, water, forests, oil and gas, coastline and solid minerals.

The country, he noted, has all the attributes of a great nation but has not achieved greatness because the one commodity it has been unable to exploit to the fullest is unity of purpose.

This, he said, would have enabled Nigeria to achieve not only more orderly political evolution and integration but also continuity and economic progress.

“Countries far less endowed have made greater economic progress by greater coherence and unity of purpose.

“Nonetheless, that we have remained together is an achievement we should all appreciate and try to consolidate. We have witnessed this year a sea change in our democratic development.

“The fact that an opposition party replaced an entrenched government in a free and fair election is indicative of the deeper roots of our democratic system.

“Whatever one’s views are, Nigerians must thank former President Jonathan for not digging-in in the face of defeat and thereby saving the country untold consequences”, Buhari said.

The president said he was not out to witch-hunt anyone, adding that only the guilty had cause to be afraid.