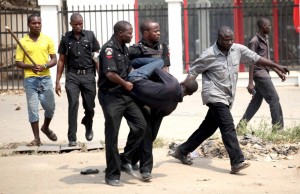 THERE was pandemonium at the B Division Police Station Warri as a physically challenged man, Samson Akpofure scaled the over 10 feet fence into the station. According to the source, “I was in a popular brothel in Ginuwa street to carry out investigation and Police raided the place and arrested all of us. At the station I introduced myself as a journalist and my mission and the Divisional Police Officer, CSP Eyoh Anietie who led the operation set me free.

“When I was about leaving at about 11pm, I saw the station guard barking orders and other police who partook in the night raid rushed there and the disabled man was arrested after scaling the high fence. “The police were shocked how a one legged man can jump that height. On interrogation he confessed to come from Essi Layout area of Warri.”

A police source who confirmed the incident said that the suspect could not explain his mission to the newly fenced police station. He added that the suspect could be a member of criminal gang who may have planned to invade the police using the disabled man for the attack as was in the case in the recent Kwara State commercial bank attack.