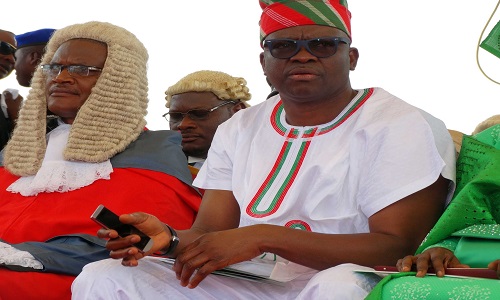 The All Progressives Congress (APC) in Ekiti State has berated Governor Ayo Fayose for accusing the Nigerian judiciary of corruption without having any concrete evidence to back up his claim.

The party also expressed its support for the decision of the Nigerian Army to probe the involvement of its personnel in the alleged rigging and intimidation that characterized the June 21, 2014 governorship poll in the state.

The Ekiti APC Publicity Secretary, Taiwo Olatunbosun, in a statement on Thursday, described Fayose’s accusation of Nigerian judges as “a paradoxical assault by a man who holds the judiciary in contempt even though he is also the greatest beneficiary of the same purportedly corrupt judiciary in his political career”.

Governor Fayose had at a church service to mark the commencement of the New Legal Year on Tuesday, accused Nigerian judges of corruption, saying some of them were begging to get appointment as election tribunals’ chairmen in order to extort money from politicians.

Reacting to the comment, Olatunbosun said: “It is regrettable that Fayose is always having his jokes on the judiciary that decent Nigerian leaders built to serve as a sacred sanctuary of justice, but which Fayose has turned to a lap dog that he can whip at his pleasure.

“He created various obstacles to slow down his prosecution in the N1.3b poultry project fraud and orchestrated closure of the courts for a long time to prevent hearing on his perjury case to pervert the course of justice.

“But we wish to remind Fayose that these various assaults on the judiciary are worse than corruption”.