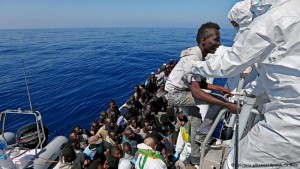 Six European Union warships have started military operation, patrolling international waters in the Mediterranean Sea to catch human traffickers who bring refugees to Europe. The mission off the coast of Libya – the departure point for many of the refugees – launching on Wednesday includes an Italian aircraft carrier, a French frigate and one British, one Spanish and two German ships. Aljazeera has more:

On board the Werra, one of the German ships taking part, the 100-person strong crew has already carried out several exercises, including a simulation of an attack carried out by traffickers, to which they responded by opening fire.  For this mission, the team includes sailors trained in boarding ships on the high seas, the Werra’s captain Stefan Klatt told AFP news agency.

The EU gave the go-ahead for the operation in international waters in September, but its ships are not, for now, allowed to pursue traffickers into Libyan waters. “We follow the traffickers and want to arrest them and seize their ships,” the captain said, adding that he’ll get as close to Libyan waters as he can.

At least three other vessels supplied by the Belgian, British and Slovenian navies are expected to arrive in the area at the end of October to complete the force, which also include four aircraft and 1,318 personnel. The planning of the mission –  EUNAVFOR MED –  started in June with the first phase focusing on compiling and analysing information on the trafficker networks.