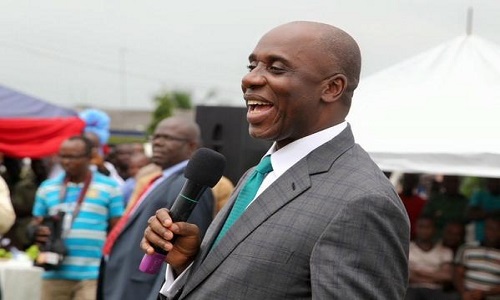 The immediate past governor of Rivers State, Chibuike Rotimi Amaechi and governorship candidate of the All Progressive Congress, APC, in the last general elections in the state, Dr Dakuku Peterside, on Sunday expressed gratitude to God for the Tribunal’s judgment, which nullified the election of Governor Nyesom Wike.

Speaking Sunday evening at a forum of the party in Port Harcourt, the Rivers State capital, Amaechi said those familiar with his political history know that things sometimes don’t come easy.

He said the APC won the tribunal judgment by the grace of God and nothing else.

The minister-designate added that even if the Appeal Court up to the Supreme Court upholds the verdict of the governorship tribunal, it is still not yet time for celebration

“This is not a new path for those of you who know me. We did not know they had fixed Saturday for judgment, [but] here we are to thank God”, he stated.

Amaechi told the gathering to turn to Luke chapter 17 reading from verse 11, which tells the story of the ten lepers cured of leprosy but only one returning to express gratitude to God for the healing.

The former governor charged his followers to learn to give thanks, saying God had been there for him.

He said he became a governor at 42 and at 50… (The crowd echoed ‘Minister’). He said he will ever be grateful to God.

Amaechi also enjoined his followers to continue to pray for victory politically.

On his part, Peterside said he was hopeful that the party will win the rerun election ordered by the tribunal.

He called on members of the party to be peaceful and continue to conduct themselves decently.

The candidate went down memory lane, saying that it was in October 2007 former governor Amaechi secured a Supreme Court judgment that installed him governor of the state, adding that in the same month, eight years later, a tribunal ruled, annulling the last governorship election.

Amaechi, who spoke to newsmen on the sideline of the event, also expressed assurance that the party will reclaim the state.