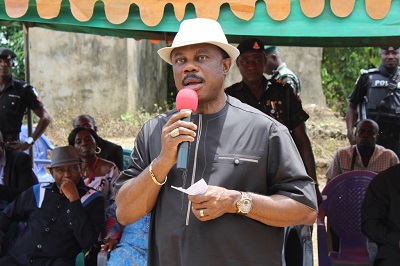 Anambra State Governor Wille Obiano has appealed to President Muhammadu Buhari to refund the N25 billion debt which the state government spent in reconstructing federal roads in the state.

Obiano made the call at the Governor’s Lodge, Amawbia during a stakeholder’s forum to mark his 18 months in office. He said the amount if refunded would be channeled towards other pressing needs in the state.

According to the governor, while some state governors sought federal government’s bailout over their inability to pay salaries, Anambra is being owed such a huge sum of money in the midst of dwindling federal allocations to the states and internally generated revenues.

However, the governor expressed optimism that the federal government would look into the matter, judging from his last discussion with Buhari last week which showed that efforts were being made to refund the money to the state.

Obiano also spoke proudly of his administration’s efforts to plug leakages. He noted that a forensic audit he ordered in the state public service exposed about 520 ghost workers

According to him, the amount recovered, his creative approach to revenue generation, and investment inflow accounted for the buoyancy of the state and its ability to pay salaries and meet other obligations.

He said when he assumed office, there were 150 accounts in operation in the state but he reduced them to just one, prior to the federal government’s directive on Treasury Single Account (TSA).