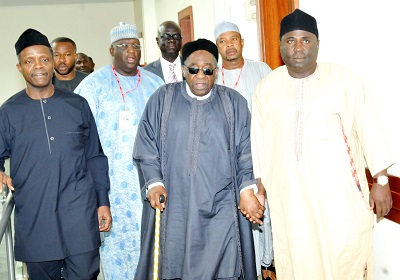 A Minister in the First and Second Republic, Alhaji Maitama Sule has called on the Federal Government to create policies that caters for the old and ageing.

According to him, as a matter of priority, adequate care should be given to the  aged in the country as it is for the country’s best interest, because if the aged are mentally alert, they will be useful to the society and must be cared for rather than being dumped in the old people’s homes.

Maitaima made the remark at the Inaugural ceremony of the International Conference of the  African Society For Ageing Research and Development(ASARD) in Abuja on Tuesday. He said the secret of not ageing is having faith in God, adding that mental ageing is worse than physical ageing but both can be delayed through faith in God.

“We need the old, we need the experience of the old, every society needs the old people because the combination of the young and old is neccessary, new breed without the old breed will breed greed. If the old are mentally alert, they should be useful to the Society and must be cared for,” Sule, who is a member of the Board of Trustees, African Society for Ageing Research and Development (ASARD), said.

Speaking earlier, the Executive Secretary of the National Universities Commission(NUC), Professor Julius okojie said that the population of older persons in Africa, aged between 60 years and above has been rapidly growing and was expected to increase from 59.8 million in 2012 to 64.5 million in 2015.

“To stimulate research policy and dialogue  and to harness scientific research outcomes for the evidence based interventions in ageing, the National Universities Commission through its collaborative work with the Dave Omokaro Foundation in Gerontology and Geriatrics, founded  the African society for Ageing Research and Development(ASARD) in 2012”.

He further said that the NUC in collaboration with major stakeholders has the mandate to play critical roles in improving capacities of institutions and individuals to understand the challenges and the emerging care needs of older persons.