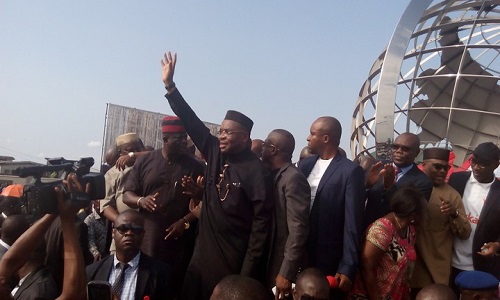 About 48 hours after the Governorship Election Petitions Tribunal sitting in Abuja ordered re-run elections in 18 out of 31 local government areas of Akwa Ibom State, the governor, Udom Emmanuel, on Friday returned to a heroic welcome and show of solidarity by his supporters.

In spite of the fact that the people only got wind of news of his intended return to the state few hours before his arrival, thousands of party supporters were on hand to welcome Gov. Emmanuel back to the state.

The welcome party, which began with the governor’s arrival at the Akwa Ibom International Airport, Uyo, later moved to Wellington Bassey Way, where Mr. Emmanuel also addressed the people.

Governor Emmanuel also used the occasion to reassure the people of his administration’s commitment to development of the state.