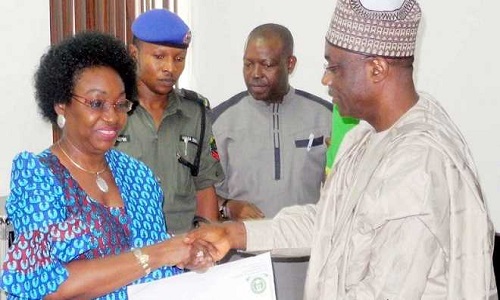 Mr Danladi Kifasi, the outgoing Head of the Civil Service of the Federation (HOS), has called for more attention to the provision of welfare support for civil servants.

Kifasi made the call while presenting his hand-over notes to the Acting HOS, Mrs Winifred Oyo-Ita, on Thursday in Abuja.

According to Kifasi, the desire to motivate civil servants for higher productivity has always been constrained by lean budgetary allocation.

He said it had become imperative to adjust expenditure to meet critical needs, sustain operations and ensure effective service delivery to the public.

Kifasi maintained that he had kept faith with the oath of allegiance he took on assumption of office 13 months ago, serving the country dutifully and faithfully.

He stressed that with the cooperation of permanent secretaries, he had achieved a lot within the period he was in office.

He thanked President Muhammadu Buhari for the opportunity given him to serve.

Kifasi promised continued support for the Buhari administration as he retires, adding that he would always remain proud of the country`s civil servants, whom he said, played a significant role in stabilising the polity.

“I am sincerely proud of you all for your sense of duty, patriotism and professionalism”.

Kifasi, who joined the civil service in 1990 as Assistant Director Accounts, said he had been confronted with lots of challenges which made him a better leader.

He said that in spite of the challenges, he remained focused on achieving results and had imbibed the spirit of perseverance and hard work as critical virtues.

He stressed that his civil service career had been rewarding as it was a training platform that prepared him to handle diverse life challenges.

He said his office worked with the National Planning Commission, the Federal Civil Service Commission and the Bureau of Public Service Reforms to develop a new, robust performance management system.

Kifasi further added that the office under his leadership, had concluded plans to reduce arbitrariness in recruitment and to ensure prudence in the use of personnel budget.

He congratulated Oyo-Ita for her appointment and apologised to those that he may have offended in the course of duty, adding that “it was borne out of the desire to deliver”.

“It was not intended to hurt anyone, but to unlock your full potentials for timely and quality service delivery.

“I apologise, if I have offended any of you in my words or actions”, he added.

The ex-HOS charged public servants to cooperate with his successor to enable her to succeed in the task ahead.

In her remarks, Oyo-Ita thanked Buhari for the opportunity to serve as HOS and commended Kifasi for his insight and service to the nation.

She stressed the need for civil servants to be innovative and to reposition themselves to deliver timely and quality services to meet the desire of the people.

Oyo-Ita said that for the country to remain relevant, its workforce had to key into government and global agenda, especially, the new set of Sustainable Development Goals (SDGs).

She called for the collective support of all civil servants, particularly Permanent Secretaries, to implement government policies and agenda with excellence and in the interest of Nigerians.

The News Agency of Nigeria (NAN) reports that Oyo-Ita is the 12th HOS and the third female to be appointed into the position.

Oyo-Ita, a 1984 Accounting graduate of the University of Lagos, holds a Masters’ degree from the Nasarawa State University, Keffi.

She is a Fellow of the Institute of Chartered Accountants of Nigeria (ICAN).