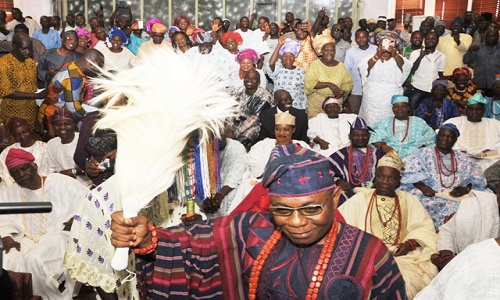 The leadership of the Igbo community in Akure, Ondo State, on Friday ate the proverbial humble pie and begged for forgiveness from the Deji of Akure, Oba Aladetoyinbo Adelusi, following a misunderstanding between the Igbo community and the palace.

The Deji had vowed to nullify the position of the Eze Ndigbo of Akure, after the title holder, Gregory Iloehika, allegedly insulted him

Mr. Iloehika, was accused of rude behaviour at the Deji’s palace, an action which angered the Deji-in-council and resulted in a war of wits between the palace chiefs and Igbo traders.

What started as a leadership crisis between Igbos and Yorubas at the Mojere Market in Akure two weeks ago, became national news after the intervention from the Deji’s palace were resisted by the Igbo traders.

Mr. Iloehika, who was reportedly summoned by Oba Adelusi to his palace to find a lasting solution to the crisis between the traders, was said to have not only kept the traditional ruler and his chiefs waiting, but made uncomplimentary remarks against the Deji in Council.

But for the timely intervention of policemen in the palace who whisked him away, the Eze Ndigbo of Akure would have been mobbed by youths of the town, who felt aggrieved by Iloehika’s seeming disrespect of the Deji.

Viewing the action as an insult to the traditional stool, the Deji ordered the closure of the shops of the Igbo traders as well as the business premises of Mr. Iloehika along Cathedral Road in the heart of the ancient city.

His position as Eze Ndigbo was also nullified, with a declaration that he should no longer parade himself as the leader of the Igbo community in Akure.

In response, the Igbo community shutdown their businesses in strategic markets in solidarity with their leader, causing some hardship in the town.

The spare parts markets were almost grounded and vehicles’ owners and mechanics had a hard time sourcing parts for vehicles needing repairs as the Igbo traders were the major suppliers.

Sensing the dangerous turn of events, the Ondo State Government waded in by organizing a peace meeting between the palace and the Igbo community.

Led by the President of the Ohaeneze Ndigbo, Ondo State, Okechukwu Okorie, the Chief of Staff to the state governor, Kola Ademujimi, Mr. Iloehika and other members of the Igbo community prostrated before the monarch, seeking his forgiveness.

Speaking on behalf of the delegation, one Mr, Anoliefo said the Igbo people had found Akure a hospitable place in the last 100 years.

He, therefore, urged the Deji to forgive their errors, promising that such action would not repeat itself in the future.

Also speaking, Mr. Ademujimi appealed to the Deji to forgive all the wrongdoings of his Igbo brothers, saying there would be no meaningful development in an atmosphere of rancour.

Responding, Oba Aladetoyinbo said he had pardoned the offenders, promising that their shops at the markets would be opened on Saturday.

He also thanked Governor Mimiko for his intervention as well as Akure youths for their peaceful disposition all through the crisis.

The Deji, however, said the position of the disputed Eze Ndigbo would be considered at the council of Obas, which would hold next week.