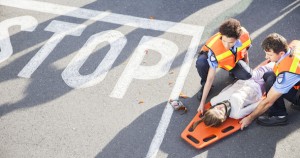 The Florida Legislature is considering a measure that would welcome discrimination against women and LGBT people on a level we’ve scarcely seen before. House Bill 101 guarantees businesses the right to turn away gay couples if doing so “would be contrary to [their] religious or moral convictions.” That includes private adoption agencies who may not want to place a needy child with a same-sex couple.

But the bill also states that hospitals, nursing homes and other health-care facilities can refuse to treat a patient—or administer a medication—if it goes against its “religious or moral convictions or policies.”

So not only are corporations citizens, they have religious rights. Such a recklessly broad law would have staggering implications: EMTs could refuse to treat a homosexual—unless, it “place[d] the patient in imminent danger of loss of life or serious bodily injury.”