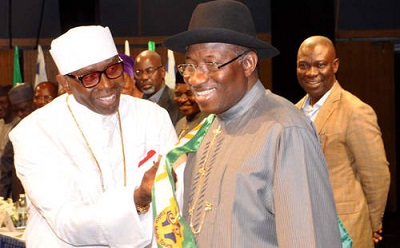 The Christian Association of Nigeria, CAN, has reacted to a statement credited to Rev. Chris Okotie that its President, Pastor Ayo Oritsejafor, ‘deceived’ former President Goodluck Jonathan into contesting the 2015 presidential election.

Okotie, who is the General Overseer of Household of God Church, Lagos, had while delivering a sermon in his church on Sunday, accused the CAN president of giving Mr. Jonathan hope of victory in the election with his ‘false’ prophecy.

The then president went into the March 28 presidential election confident of victory only to be defeated by the then opposition’s candidate, General Muhammadu Buhari (retd.).

According to Rev. Okotie, the former president wouldn’t have contested the election in the first place had he not been misled by Pastor Oritsejafor.

“Pastor Oritsejafor deceived Jonathan with a false prophecy from God that he (Jonathan) would win the election convincingly”, he said. “The man (Jonathan) became convinced to contest after Oritsejafor had told him, using CAN’s name, that God had ordained him the winner of the 2015 presidential election”.

But responding on behalf of Oritsejafor, the Director of National Issues in CAN, Mr. Sunny Oibe, accused Okotie of seeking cheap popularity by attacking its national president.

He said, “Well, it is laughable if Chris Okotie is making this spurious allegation…We will not like to take issues with Okotie…because doing that will amount to making him popular. He is looking for popularity which he doesn’t have through Pastor Ayo and he is not going to get it.

“Okotie knows exactly that what he is saying is not true. Nigerians should know that Pastor Oritsejafor is not among those pastors that make prophecies. He does not make prophecy and never said anything during the campaigns. Why would he bring politics into the pulpit?

“This is where we Christians are getting it wrong. They are the ones misleading Nigerians. Oritsejafor never made any prophecy concerning Jonathan and the 2015 presidential election. I challenged any Nigerian with evidence to come forward”.