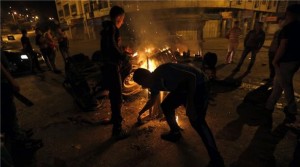 Palestinians have clashed with Israeli forces and settlers across the West Bank as violence continued to grip the occupied Palestinian territories and Israel. Israeli settlers were extracted by the army in Nablus on Sunday after clashing with local Palestinian residents near the Joseph’s Tomb holy site, while Israeli soldiers clashed with armed Palestinians in the Qalandia refugee camp. Aljazeera reports:

Israeli forces entered the Qalandia camp, situated between occupied East Jerusalem and Ramallah, during the early hours of Sunday morning. Clashes broke out between the soldiers and armed residents of the camp, according to local media.  At least three residents were injured by live ammunition and several were arrested.

On Saturday, five Palestinians were shot dead by Israeli forces or settlers during alleged stabbing incidents.  Triggered by Israeli incursions into the Al-Aqsa Mosque compound last month, protests against Israel’s occupation have increased in frequency across the West Bank, including East Jerusalem, and the Gaza Strip.

Israeli forces have responded with a crackdown on protesters, using tear gas, stun grenades, rubber-coated steel bullets and live ammunition. At least 43 Palestinians – including suspected attackers, unarmed protesters and bystanders – have been killed by Israel since October 1.  Seven Israelis have been killed in attacks by Palestinians this month.