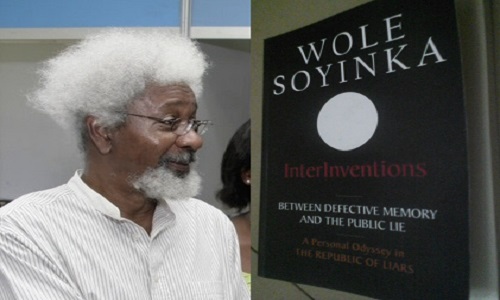 Soyinka said the book would be his “vengeance” against “unprovoked assault of public lies” against his person.

The renowned playwright spoke at the formal inauguration of The Wole Soyinka Foundation, a retreat haven for writers.

He described InterInventions as “the nastiest book” he has ever written.

The 130 page work – InterInventions, Between Defective Memory and Public Lie, A Personal Odyssey in The Republic of Liars – was presented to the public at the June 12 Cultural Centre Kuto, Abeokuta by the Edo State governor, Comrade Adams Oshiohmole.

Soyinka said the book is “so truthful that it hurts” and recommended it to people who “feel vengeful” towards purveyors of public lies because of its expected therapeutic value.

“(InterInventions), it is the nastiest book I have ever written. It is so truthful that it hurts… it is my vengeance against public lies. It is not one of the butterfly books. No, it is not a butterfly book.

“I want to draw blood (with it). I’m warning all of you, if you feel vengeful, read this book and you will be alright. It is like homeopathic medicine”, Prof. Soyinka said.

The Nobel Laureate bemoaned the elevation of public lies to a level that it has become an industry of sort, multiplying itself and worsened by the social media facilitating the predisposition for lies.

On page seven of the book, he decried public lies – “lies of staggering impudence, especially considering the fact that, in most cases, both victims and their traducers are still living”.

According to him, there is the need for a “ritual of public purgation where both sides – such victims of lies and the traducers, are brought together before the public tribunal for the world to know the truth”.

Soyinka also gave insight into lies, allegedly against him by some individuals and past leaders, including former Governor of Ogun State, Otunba Gbenga Daniel, stating in first paragraph of page 82 that “it was a great fun (for him, Soyinka) to watch him (Daniel) lie his head off”.

Kongi, as he is fondly called by friends and admirers, revealed that he “would have gone insane” if he had not found a serene place to hide himself while doing his creative work.

Oshiomhole described Soyinka as a great and relentless fighter, saying the nation needs social warriors who speak the truth without giving a hoot whose ox is gored.

The governor, who attended the event in the company of his beautiful wife, Iara, added that The Wole Soyinka Foundation is a worthy cause that should be identified with by Nigerians.