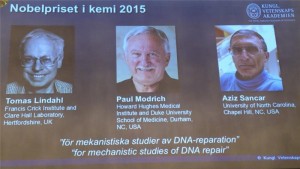 Three scientists from Sweden, the US and Turkey have won the Nobel Prize in chemistry for showing how cells repair damaged DNA. Their work can be used to develop new cancer treatments. Swedish scientist Tomas Lindahl, American Paul Modrich and US-Turkish national Aziz Sancar shared the $960,000 prize, awarded on Wednesday.

The Royal Swedish Academy of Sciences said their work on DNA repair “has provided fundamental knowledge of how a living cell functions” and can be used for the development of new cancer treatments, the Associated Press news agency reported.

Sancar is a professor at the University of North Carolina School of Medicine in Chapel Hill, North Carolina. Sancar is the second Turk to win a Nobel Prize after novelist Orhan Pamuk was awarded the literature prize in 2006, and the first in a scientific field.

“I’m sure there will be (celebrations in Turkey),” Sancar said. “Yes, they’ve been asking over the years and I was tired of hearing ‘when are you going to get the Nobel Prize?’ so I’m glad for my country as well.” Sancar added that he hoped his award would inspire younger Turkish scientists.