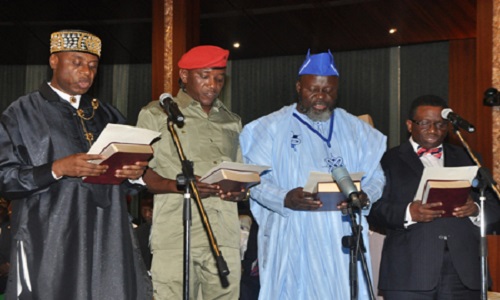 The Peoples Democratic Party in Rivers State on Thursday described the new Minister of Transportation and the former State Governor, Rotimi Amaechi as a “misfit”, saying his appointment will not make any meaningful impact to the Rivers people.

The Rivers PDP Chairman, Bro Felix Obuah, said this through a statement by his Special Adviser on Media and Publicity, Jerry Needam while reacting to the official swearing in of the new Ministers and assigning of portfolios to them on Wednesday by President Muhammadu Buhari.

According to the State PDP chair, a ministerial slot for Rivers State given to Amaechi is a loss to the State because he (Amaechi) is at war with the State and does not believe in the development vision of the State Governor, Barr. Nyesom Wike.

The new minister, the State PDP boss noted, has shown in his actions and conduct that he is not a believer nor supporter of any development plan that does not have his endorsement or that of his acolytes, which is not good for any group of people that desire progress.

“Rivers State has an appreciable number of qualified, prudent and humble sons and daughters with burning desire to move the State forward and help promote the existing peace and love among the people which Gov Wike has graciously put in place in only five months in office.

“We’ll therefore be happy to have the federal government or any other agency that means well for the State to always pick from this pool of resourceful and more enterprising human capital other than those with penchant for misleading, mishandling and mismanaging the scare resources of the State as exemplified by the Amaechi administration”, Obuah advised.

The Rivers PDP recalled that despite the stiff opposition to the nomination of the ex-governor as a Ministerial nominee by both Rivers people and Nigerians, President Buhari still went ahead to ratify his nomination by appointing him the Minister of Transportation.

“To register their disapproval of Amaechi’s appointment, all PDP Senators walked out of the National Assembly for allowing the APC members’ insistence on Amaechi’s confirmation which the PDP described as official institutionalization of corruption in Nigeria.

“Majority of Nigerians also have in one voice kicked against Amaechi’s nomination and appointment as Minister of Transportation”, it added.