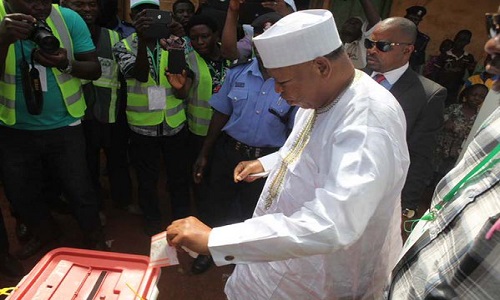 The Independent National Electoral Commission, INEC, declared the election inconclusive on Sunday after the media had widely reported that Audu won the with 240, 867 votes in 16 out of the 21 Local Government Areas of the state.

Declaring the election inconclusive, the INEC Returning Officer, Prof. Emmanuel Kucha of Federal University of Agriculture, Makurdi, said the total number of cancelled votes was higher than the margin between Audu and the runner up, Governor Idris Wada of the Peoples Democratic Party, PDP, who got a total of 199, 514 votes.

The number of registered voters in the polling units where INEC canceled elections is 49, 953 while the margin between the votes polled by both candidates is 41, 353.

The APC Senator representing Kaduna Central, Senator Shehu Sani and the United Kingdom chapter of the APC some few minutes ago confirmed Audu’s death via their respective Twitter handles.

We extend our deepest sympathies to d family of Abubakar Audu. May His Soul be at peace with our Heavenly Father. pic.twitter.com/fOL0PtnJ4T