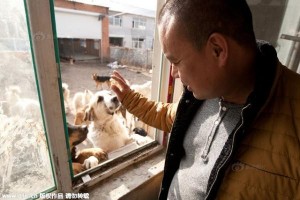 At age 29, Wang Yan has earned and lost more money than most people would in a lifetime. He used to be a millionaire businessman with a successful steel factory in Changchun, in China’s Jilin province. But now he doesn’t have a penny to his name, having spent his entire fortune rescuing dogs from being butchered! Oddity Central has more:

Yan was compelled to help dogs after he first witnessed their plight in 2012. He was searching for his own missing pet dog when he saw someone who suggested he try searching at a butcher’s shop. His dog wasn’t there, but he hung around for a week and saw how the other dogs were being brutally killed. Deeply disturbed, he vowed to buy every single dog from the butcher, just so he could save them from a horrible death.

Yan kept buying dogs until he had no place to house them anymore. So he evacuated his factory and renamed the building ‘Changchun Animal Rescue Base’. He’s saved thousands of dogs so far, many of which have been adopted by dog lovers. “There are 215 dogs at the base now, mostly came from the slaughterhouses, saved by volunteers and brought here,” he said. “We used to house over 1,000 dogs, many have been adopted later.”

Yan poured so much money into the rescue operation that his fortune eventually evaporated, and he’s now run into debt. But he has no regrets, his greatest worry for now is to keep the dogs warm during the harsh winter ahead. He is in need of warmer shelter and more food supplies for the dogs. Without proper heating, the animals couldn’t possible survive the cold in the northeastern province of Jilin.