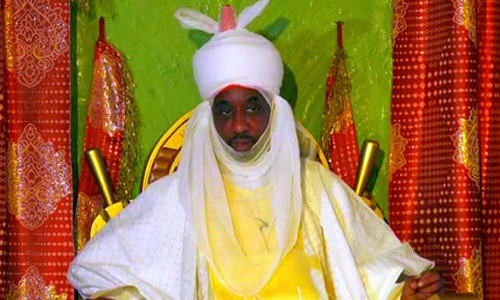 Former Governor of the Central Bank of Nigeria and Emir of Kano, Muhammadu Sanusi II, has reacted to the recent excerpts of an interview by the immediate past Minister of Petroleum Resources, Diezani Alison-Madueke, over the alleged missing $20 billion under ex-President Goodluck Jonathan.

Diezani, in the interview, her first since she disappeared from public glare after leaving office in May, insinuated that the former CBN governor may have made the damning allegation against her, over the Presidency’s frustration of his bid to head the African Development Bank (AfDB).

The former minister had while reacting to the allegation that the NNPC, which was under her supervision could not account for $20 billion crude oil receipts, said “If there is one issue I must pursue in this world, it is the biggest lie of this money. How can $20 billion disappear just like that? Where did it disappear to? Is it possible that such an amount would not be traceable?”

Mrs. Alison-Madueke, who is undergoing treatment for cancer in the UK, said the allegation was more painful considering it came from the then CBN Governor, who she considered a good friend and should have weighed the enormity of his claim before going public with same.

“I challenge anyone to come forward with facts showing that I stole government or public money. I’ve never stolen Nigeria’s money”, the ex-minister insisted.

In response to the interview, the Emir of Kano described the former minister as a liar.

In a press statement on Saturday, Sanusi II explained that his allegations against Alison-Madueke were not based on personal sentiments, but out of a genuine concern for the looting of the nation’s coffers.

According to him: “It is not something that is hidden that anybody who is seeking that job must get the support of his country. Knowing fully that I went to the President with my intention and before I made the exposure of the $20bn oil deal, Jonathan clearly indicated his support for me.

“He even directed Hassan Tukur, his Principal Private Secretary to write to African heads of state. So, what is Diezani saying? One can now see that she is lying.

“My suspension came a week after I made the disclosure of the missing monies, precisely on February 20, 2014. As at that time, I was the only candidate from Nigeria gunning for the AfDB job, but you know one cannot have it when he is suspended.

“My passports were all confiscated. Jonathan in trying to punish me denied me of the job and replaced me with Akin Adesina, who is my personal friend.

“The question that remains for Diezani to answer is: Was there $6bn said to have been remitted to NPDC which they denied? As for that denial, who is holding that money? What happened to the inflated N6 per litre kerosene subsidy?

“Where is the money said to be paid to that effect? All these questions formed the basis upon which I was suspended and denied the AfDB job.

“Certainly, there is nothing personal. It is our nation’s money we are talking about. One cannot take away the treasury and expect to go scot-free. He must answer the basic questions. Everyone is aware that I was punished by former President Jonathan for exposing the missing $20bn”.

Sanusi II claimed that his punishment after suspending him from the CBN and withholding his passports, was to block him from emerging the AfDB president but that by divine providence, he is Emir of Kano today, a position far better than what he was denied by the Jonathan administration.