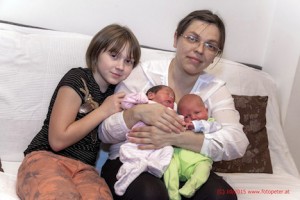 The double joy of childbirth for an Austrian mother who gave birth to twins was shattered when her husband died from a heart attack at the exact moment his children were coming into the world. Read more from The Local:

The tragedy struck as Alina Markus, 30, gave birth at the AKH hospital in the Austrian capital Vienna on October 11th. Her husband Andreas Markus was at their home in Schwechat, Lower Austria, when he suddenly collapsed from a cardiac arrest in front of their 10-year-old daughter.

Alina had gone for a check-up in the AKH, and it was only at the last minute that  she went into labour earlier than planned. The birth was straightforward and without complications. But in a tragic twist just moments later, Andreas, 47, collapsed and his daughter called for help. He was taken to a hospital in Baden, Lower Austria, where he died a short while later. Doctors in the AKH were forced to break the news to Alina as she lay in her hospital bed.

They said: “Your husband suffered a heart attack whilst you were giving birth, he did not survive.” The now mother-of-three has been left in a desperate state, shattered that her husband will never see or hug their babies. The Ukrainian-born Mrs Markus is under sedation. Friends are rallying but her in-laws, who never approved of her relationship with their son, have allegedly cut her off.

A local event manager, Thomas Hetlinger, is putting on a concert “Voices – One Night of Evergreen” including a performance by Greg Bannis – ex-front man of the band Hot Chocolate – in the Austrian capital with 50 percent of the proceeds going to the widow.  He said: “Their apartment is too small. She has to pay the funeral costs. Alina fears for her existence.” He added: “The family urgently need things for the babies – baby food, funeral costs and rent are all things she is struggling with now.”