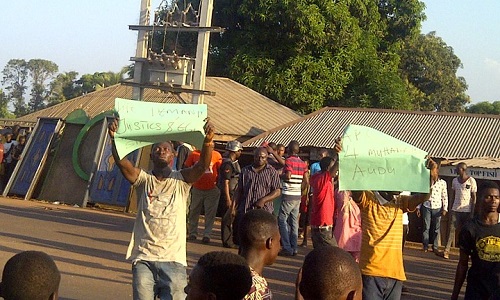 Aggrieved youth in Itobe, Ofu LGA of Kogi State, Saturday kicked against the All Progressives Congress’ decision to nominate Alhaji Yahaya Bello as the replacement of the late governorship candidate of the party, Prince Abubakar Audu.

The late Audu hails from Ogbonicha, in Ofu LGA.

The youths, who came out in their numbers, barricaded the Itobe Bridge, which is the only major link from Lokoja to other parts of the state and the country at large.

It was learnt that the blockade led to a serious traffic gridlock as commuters travelling from the eastern parts of the country country as well as other parts of the state, had to remain at a standstill for over three hours.

The protesting youth called on President Muhammadu Buhari and the National leadership of the APC not to test the collective will of the Igala people.

It was learnt that it took the combined efforts of anti-riot policemen deployed to the area to restore normalcy on the road and free flow of traffic.

The Kogi Police Command spokesperson, William Aya, confirmed the incident, saying that policemen were drafted to the area and had brought the situation under control.