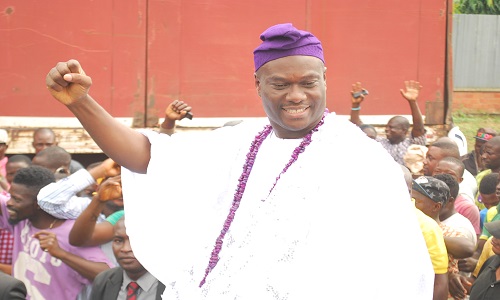 The ancient town of Ile-Ife in Osun State, historically regarded as the cradle of Yoruba nation, will come to life today as Prince Adeyeye Enitan Ogunwusi will be crowned as the Arole-Oduduwa and assume the title of Ojaja II.

Ogunwusi’s coronation as the 51st Ooni of Ife follows the completion of pre-installation rites, which began at the Ilofi shrine at Iremo in Ife, late yesterday.

Prince Ogunwusi had begun the traditional rites at Ilofi since October 30, 2015 where he underwent installation rites along with tutelage on his functions as an Ooni.

However, it was learnt that the coronation of Ogunwusi will not be done in the open but rather behind closed doors in Ile Oodua, as the Ooni’s Palace is known.

Oba Ogunwusi would also be setting foot into the palace for the first time as Ooni today since the passing away of his predecessor, Oba Okunade Sijuwade

“In line with the demand of Ile Ife customs and traditions, his coronation will hold behind closed doors. Only the Isoros and Ife chiefs will be involved but I can confirm it will be done inside the palace”, a source told LEADERSHIP.

Confirming the news in a chat with reporters, former Special Adviser on Youth and Sports to Osun State Governor, Mr. Biyi Odunlade, said that the new Ooni will be crowned today inside Ile Oodua.

The Ooni’s official coronation and public inauguration is billed for December 7, 2015.