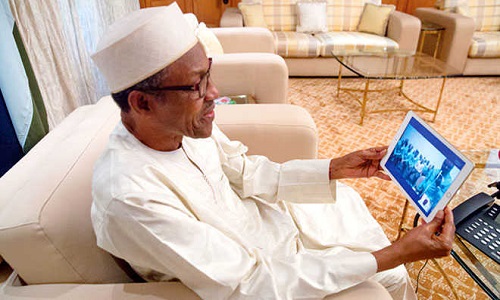 President Muhammadu Buhari on Saturday evening spoke with the Golden Eaglets and their officials for about 24 minutes, urging them to go for victory in Sunday’s final of the Under-17 FIFA World Cup holding in Chile.

The Special Adviser to the President on Media and Publicity, Mr Femi Adesina, said this in a statement last night.

According to Adesina, Nigeria first won the inaugural edition of the U-17 tournament in China in 1985 when Buhari was military head of state.

Buhari was quoted as urging the team to repeat the same feat today against Mali to make it the fifth time Nigeria would win the trophy.

Nigeria defeated Mexico 4-2 in a thrilling encounter while Mali also fought back from a goal down to earn a 3-1 victory over Belgium in the semi-finals.

The African sides will go head-to-head for the trophy on Sunday at the Estadio Sausalito in Vina del Mar.

Starting with the head coach, Emmanuel Amuneke, Buhari congratulated him for leading the team to the final, and then said: “Your victory tomorrow will remind Nigerians of what happened in China 30 years ago, and it will raise the morale of Nigerians, especially the youths. We’re praying for you. We are anxiously waiting to receive the cup. Please put us on the world map of soccer again”.

The president also spoke to Udoh Akpan, the goalkeeper, whom he described as a very strategic member of the team, noting that “If you don’t let in the goals, then none will be scored against us. We look forward to lifting the cup”.

To John Lazarus, a defender, Buhari said: “Don’t allow anybody to penetrate the defense”, while charging Tobechukwu Ibe, another defender to “rest well today (yesterday), because a lot of Nigerians will be depending on you tomorrow (today)”.

To top striker, Victor Osimhen, who has nine goals to his name so far in the tournament, Buhari said: “Strike like thunder tomorrow. I believe you will bring us victory”.

To the team captain, Kelechi Nwakali, President Buhari charged him to maintain his winning leadership; while Joel Osikel, a midfielder, was told by the president that he was “the jewel of the team”, and challenged him to contribute his quota towards victory.

Adesina said apart from the 21 players and head coach, the president also had encouraging words for other members of the technical team, the team doctor, physiotherapist, media officer, and other officials.

He quoted both Coach Amuneke and the team captain as thanking President Buhari for his support, and promised not to let him and the country down.