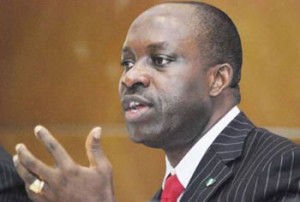 Former Governor of the Central Bank of Nigeria (CBN) Professor Charles Soludo has shown over the years that he is never scared to air his views. He has spoken again, now faulting the implementation of the Treasury Single Account (TSA) by the Federal Government and the policy regime of foreign exchange restrictions of the CBN.

Soludo spoke on Thursday as a guest lecturer at the third anniversary lecture of online magazine, Realnewsmagazine.net in Lagos. He stated that while the TSA could restore sanity and transparency into Nigeria’s financial system, the initiative could be better deployed. He stressed that “concentrating the cash at the CBN when the economy needs reviving is not sound economics.”

Speaking on the topic: ‘Can the New Buharinomics Save Nigeria?’ the former CBN boss also faulted the policy regime of foreign exchange restrictions being implemented by the CBN including the ban on 41 items on foreign exchange access and the debate on whether to further devaluate the naira or not, arguing that such policies will actually cause the economy to implode, worsen unemployment and increasing poverty level.

“For the better part of this year, the external shocks to the economy have been complicated or accentuated by a gamut of the “tried and failed” command and control policy regime: de facto fixed exchange rate, largely fixed CBN monetary policy rate, crude capital controls, veiled form of import bans through a long list of ‘ineligible for foreign exchange’, de facto scrapping of domiciliary account established by law, etc. At first, I thought this was the usual kneejerk response of policymakers to a ‘sudden’ shock. We tried a milder variant of this for a few months during the 2008/2009 unexpected/unprecedented global crisis (with global liquidity squeeze and massive capital flight) but even then, it was communicated as a ‘short-term crisis response’ and it was quickly dismantled. We now know what works and what doesn’t even at a time of crisis.

“As one reads the confusing statements from government in the media: ‘We won’t devalue’, ‘we won’t devalue for now’, and the emotional debate about ‘nationalism’ around issues of import ‘bans’ and capital controls, one wonders whether it is still a ‘short-term crisis response’ or a permanent shift back to the old policy regime of pre-1986. Even if the government initially intended it as a short-term measure, interest groups have emerged and are lobbying to make the policy shift permanent. To add to the confusion, the policy is communicated as a “directive” from PMB as widely publicised in the media.”

“In the specific case of Nigeria currently buffeted by a terms of trade shock with micro imbalances especially fiscal and current account deficits as well as supply side constraints and with the economy skidding to a halt with rising inflation and unemployment, the question is, how should relative prices or asset prices including exchange rate and interest rate adjust to reflect as well as shape whatever economic fundamentals? External shocks do not kill an economy.

“In theory, if you don’t allow prices to adjust, quantities will adjust and the quantities that will adjust are output and employment. That is the experience we have had in Nigeria over the years. And that is what is happening today. Output and employment are adjusting with vengeance. My thesis is that from Nigeria’s own evidence, that the current policy regime is inconsistent with the objectives of creating jobs, growing income and reducing poverty. Nigeria since 1973 can become a laboratory. Since 1973, we have become episodes of positive and negative price shocks. If you divide the episodes of positive oil price shocks, episodes of negative price shocks and also match them with responses of policy regimes, the evidence is that, in all cases, fixed exchange rates with controls, the economy has always done worse in that regime than in under flexible regime.”

Speaking further, he said: “From Nigeria’s evidence, current policy regime is inconsistent with objective of growth, job creation and poverty reduction. The current economic hardship is largely our choice and not just oil price shock: The current slump of the economy was predictable and largely avoidable. Just as it happened in 1981-85, the economy has been on a tailspin. There is now about 4 per cent growth shortfall relative to past trend, and this cannot be explained by fall in oil prices alone. For the first time since 1990s, per capita growth rate (on annualized basis) is now negative implying that poverty is also escalating; capital market has lost trillions, inflation and unemployment are on the rise. JP Morgan has delisted our local currency bonds and Barclays is threatening same, while the cost of borrowing for Nigeria rises. Foreign capital is on the run, while domestic savings is miniscule. It was ‘headline news’ when FG paid October salaries, while states are steeping in massive debt.”

“Policy choices entail costs and benefits, but the preference of one to another should be based on the “net positive effects”, depending on the stated objectives. To sustain the current arbitrarily pegged exchange rate will require a steep rise in interest rate and squeezing of bank credit to the private sector. Alternatively, intensifying the ever opaque and distorting controls and ‘bans’ will also severely harm the private sector. I will be surprised if the productive sector is not already feeling the heat. The irony is that it is the small businesses (which have no voice or power) that are suffering the most. Many are simply being choked to death by the ‘controls’. To repeat, the current policy regime is inconsistent with the objectives of creating jobs, growing income and reducing poverty,” Soludo said.