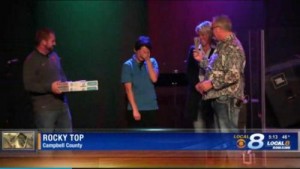 A Tennessee pizza delivery driver who brought 10 pies to a church was brought up on stage and presented with a $1,400 tip from the congregation. Domino’s driver Audrey Martin, a single mother of three children under the age of 5, delivered 10 pizzas Sunday to Covenant Life Church in Rocky Top and she was asked when she arrived to join Pastor Tony McAfee on stage.

The ensuing events were captured in a cellphone video posted to Facebook by a church member. McAffee calls for parishioners to help him give a “good” tip, and the members stream up to the stage to hand over their money. “Do you share tips? Listen, we paid you for that. Here’s $1,400,” McAfee says in the video. “We just want you to know that we appreciate you.”

Martin, who has been working for Domino’s for four months and wasn’t originally scheduled to work Sunday, said the generous tip came during a time of need for her family.

“It’s definitely hard doing it all on my own. I’m staying strong and I just have to thank the Lord,” Martin told WATE-TV. “I was just thinking how I could finally get a place for my kids because I recently lost my apartment and I was thinking how I could give my kids a good Christmas.” McAfee said he was pleased by the generosity of his congregation. “I’m telling you, there was a miracle moment Sunday, no doubt about it,” he said. “One of the greatest ways to illustrate our faith is action. Faith without works is dead.”