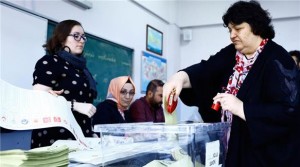 Turkey is heading to polls for a second time in five months amid instability spilling over from neighbouring Syria and renewed tensions over the 30-year-old Kurdish conflict. Aljazeera has more:

More than 54 million people are registered to vote at 175,000 stations on Sunday between 7am and 4pm in the eastern provinces of Turkey, and 8am and 5pm in the western ones.

The June 7 elections had seen the social conservative Justice and Development Party (AK party) lose its 13-year single party rule, but four political parties that made their way to the parliament failed to produce a coalition government and snap elections were called.

In the June polls, the AK party secured 258 seats in the 550-seat house, losing many to the Peoples’ Democratic Party (HDP), which achieved unprecedented success for a pro-Kurdish party by getting 80 seats.

The unofficial election results are to be announced on Sunday evening and the country’s election council will make the official ones public in several days. The main opposition centre-left Republican People’s Party (CHP) and far-right Nationalist Action Party (MHP), which respectively won 131 and 80 seats in the last elections, are the other main players in the polls – among the 16 political parties in the fray.