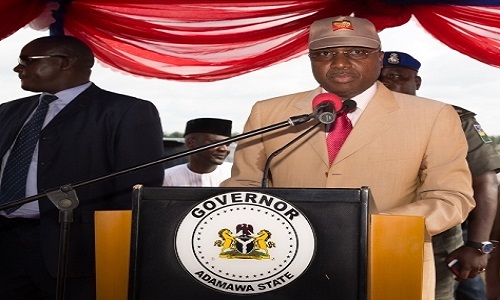 Governor Jibrilla Bindow of Adamawa said his administration had awarded contracts for the rehabilitation of 46 kilometres of road networks in Yola, Jimeta and Mubi since his inauguration seven months ago.

He stated this while interacting with some editors in Yola, the state capital.

Mr. Bindow said that most of the roads across the state were in disrepair when he took over the mantle of leadership.

He said the reconstruction of the bad ones would open up the state, facilitate movement of good services and promote economic activities.

The governor, who took the editors round some of the roads under construction, expressed satisfaction with the level of work done by the contractors so far.

“Already, some of the roads have been completed while others are at various stages of completion.

“I have pledged to work for my people in spite of the dwindling revenue accruable to the state because as leaders, we will be answerable to our creator if we fail to redeem our promises to the electorate.

“It is wicked for any governor to steal public funds.

“God has blessed me with virtually everything one needs in life; so, I lack nothing and as such I am prepared to work for the development of the state”.

Mr. Bindow also said that the state government had awarded contract for the construction of drainage systems in Yola, adding that the project would curb the perennial flooding witnessed in the area.

“We have also awarded contract for the provision of street lights on Jimeta – Yola road.

“The objective is to enhance security and beautify the state capital.

“The street light project has also reached an appreciable level of completion.

“We have also awarded contract for total re-construction of the old Government House”.

In the area of healthcare, he said contract for the rehabilitation of four General Hospitals had also been awarded as part of efforts to bring healthcare delivery to the door steps of the people.

He attributed the slow pace of the state’s development to unnecessary rivalry and disunity among its elites, adding that he had resolved to ensure judicious use of the state’s resources for the benefit of all.

Mr. Bindow also attributed the achievements recorded by his administration in the last seven months to prudent and transparent management of the state’s resources.

“To conserve money for development, I have cut down my salary to about 50 per cent; the salaries of the state’s deputy governor and other principal officers have also been slashed”, he said.

The governor, however, urged journalists not to allow themselves to be used by those who meant no well for the state and urged the media to ensure fair, balance and objective reportage of events.