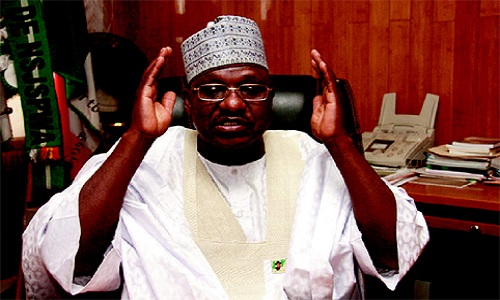 Governors elected on the platform of the Peoples Democratic Party, PDP, have taken a former political adviser to former President Goodluck Jonathan, Ahmed Gulak, to the cleaners, over his comments regarding the ongoing probe of $2.2 billion arms deal scandal, involving the former National Security Adviser, Sambo Dasuki, and others.

Speaking under the aegis of PDP Governors Forum, they asked Mr. Gulak, a former governorship aspirant in Adamawa State “to shut up if he has nothing better to say”.

The former political adviser to Mr. Jonathan was widely reported on Wednesday to have urged President Muhammadu Buhari to extend the probe of the arms deal to the former president.

According to Gulak, it doesn’t matter if the then president was aware of what was going on or not, he was liable because “the buck stops at his table”.

Recall that Gulak, who was notorious for descending hard on critics of then President Jonathan when he served as his political adviser, was fired in April of 2014.

In a statement in Abuja on Thursday, coordinator of the PDP Governors Forum, Osaro Onaiwu, expressed regrets that a man aspiring to lead the party cannot offer anything tangible other than to encourage the apparent determination of the APC-led regime to “decimate” the PDP.

Reacting to the statement credited to the former presidential adviser, the PDPGF said it hoped the statement was untrue and that he was misquoted.

“But if it is actually what he said, then it is regrettable”, Mr. Onaiwu said.

“This is a man that pretended that he was ready to die if Jonathan did not contest the 2015 presidential election having nothing positive to contribute on the attack by the APC on the former president and PDP.

“One would have expected that Gulak would call for an inclusive, unbiased investigation of the purported arms deal rather than this mercenary statement by him”, the forum said.

The PDP governors also said it was now clear to them that the court case instituted by Mr. Gulak against the PDP national executive was the handiwork of “fifth columnist out to destroy the PDP”.

“Come to think of it, Gulak is yet to shake off the bitterness of his sack by President Jonathan in 2014 given his overreaching himself just as he is doing now”, the statement reads.

Giving insight into the possible reasons why Gulak was fired by former President Jonathan, the PDP governors said he was a “loose cannon” during his time in office, a situation, they said, led to the estrangement of most governors, including the group of five governors that later defected to the APC.

They also said Mr. Gulak was free to leave the PDP for the APC “given his opportunistic inclination” rather than cause disaffection within the PDP.

On the arms deal probe, the forum lamented what it termed media trial by agents of the present government, urging a fair, impartial process in order to strengthen accountability and the rule of law in the country.

The statement also added that ”…nobody should play the sanctimonious card as each person’s antecedent is well-known given that no one fell from outer space”.