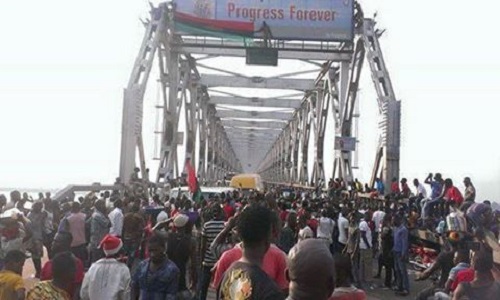 An Abuja Chief Magistrate Court, yesterday, struck out the one-count criminal charge the Federal Government preferred against the leader of the Indigenous People of Biafra (IPOB) Mr. Nnamdi Kanu, following an application by the Department of State Services, DSS, to withdraw the charge against him.

In a ruling yesterday, Chief Magistrate Shauibu Usman granted the motion for discontinuance of the matter, filed and argued by counsel to the DSS, Mr. Moses Idakwo.

The FG had urged the Magistrate Court to terminate further hearing on the charge, saying it has concluded plans to take the matter before a higher court.

Meanwhile, the IPOB protesters have now reached Alaba International market, Ojo, Lagos, as thousands of youths carrying Biafran flag and wearing its T-shirts stormed the market yesterday afternoon despite warning by the All Progressives Congress in the state.

It was gathered that the protesters demanded that traders should shut down the market today and join them in the protest.