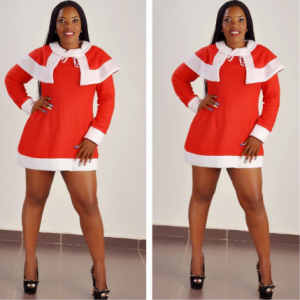 She plays the role of Mrs Santa for this year’s photos.

Empress is photographed wearing a Mrs Santa outfit, looking good in the mini ensemble complete with the Santa hat to go with it.

Advertisement
The big-eyed actress who has recently been involved in a lot of charity work, also posed with two different breeds of dogs, who wore matching Santa outfits, looking cuter than ever.
She also shared a photo of her Christmas card which also sported some of the Christmas photos, as she wished everyone compliments of the season as well as prayers for the festive season.
See photos below: –