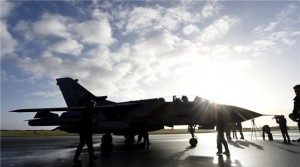 Germany’s parliament has approved Chancellor Angela Merkel’s plan to join the military mission in Syria aimed at defeating the Islamic State of Iraq and the Levant (ISIL). Germany will send six Tornado reconnaissance jets and a refueling aircraft to back up the international anti-ISIL coalition, but its military will not conduct air strikes.

The Bundestag, the lower House of parliament, voted for the mandate by an overwhelming majority of 445 votes in favour and 146 against. Seven politicians abstained. The Bundestag has to vote on any extension to the mission.

The $142m year-long mission also involves deploying up to 1,200 military personnel, as well as a frigate to support the French aircraft carrier Charles de Gaulle, which Paris has dispatched to the region. The international coalition has stepped up its campaign against the group following last month’s deadly terrorist attacks in Paris. ISIL claimed responsibility for the massacre in which 130 people were killed.

Merkel’s conservative-led coalition, which included the left-leaning Social Democrats, controls about 80 per cent of the Bundestag vote. Both the opposition hard-left Die Linke as well as members of the environmental Greens had signalled their intention to vote against the military mission.